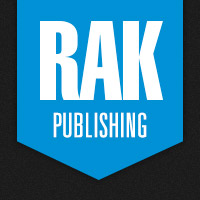 RAK Publishing was founded in 1969 by the legendary record producer Mickie Most and his wife Chris and now represents over a hundred writers including the Ivor Novello Winner Errol Brown and Gold Badge recipients Steve Harley and Suzi Quatro.

RAK publishes an extensive and varied catalogue which spans almost forty years and includes some classic hits such as "You Sexy Thing" recorded by Hot Chocolate, "Make Me Smile (Come Up And See Me)" recorded by Steve Harley & The Cockney Rebel, "I Love Rock 'n' Roll" recorded by Joan Jett and the Blackhearts and "Music" recorded by John Miles.

RAK has a network of sub publishers worldwide ranging from Major Publishers such as Sony/ATV, Warner Chappell and Kobalt to fellow independents such as Cafe Concerto, Melodie Der Welt and Clippers.

Aside from RAK's fantastic back catalogue RAK continues to sign exciting new up and coming composers and writers. RAK also administers the UK rights for several major overseas catalogues.

RAK is an enthusiastic and active company that prides itself on giving all its writers personal focus and attention. RAK handpicks successful and experienced sub-publishers all over the world and works hard on promoting and protecting copyrights in a constructive and positive way.