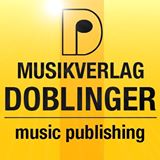 Since more than 130 years the music publishing house of Doblinger is one of the most important pillars of musical Austria. The venerable family-run business is now directed in the fifth generation by Peter Pany and is based in Vienna’s Dorotheergasse – still the first address for music.

After its foundation in 1876 by Bernhard Herzmansky the elder, the music publishers Doblinger have quickly established themselves as one of the most important and reliable partners in Austrian musical life. Great composers of the late 19th (Anton Bruckner, Gustav Mahler, Karl Goldmark) and of the early 20th centuries (Alexander Zemlinsky, Ferruccio Busoni, Ernst von Dohnányi, Franz Schmidt) as well as leading practitioners of operetta and of Wiener Lied (from Carl Michael Ziehrer to Franz Lehár and his Merry Widow as well as Oscar Straus and his Walzertraum or even Hermann Leopoldi) became the corner stones of the unprecedented representation and echo of Austrian musical activities.

After the incorporation of Austria into Hitler’s Germany in 1938 Bernhard Herzmansky the younger was incarcerated and was forbidden to set foot into his firm after three months in the Dachau concentration camp. Reinstated after 1945, he initiated Doblinger’s endeavor to become at least a publishing home for many authors prosecuted and driven out by the Nazi regime. Many of these composers were glad to return – e.g. Egon Wellesz; here we must also mention the posthumous success of the works of Erich Zeisl. Doblinger’s already traditional focus on the country’s contemporary music has been successively expanded during the past sixty years; thus, nearly all important Austrian composers of today have works published by Doblinger – starting with grandseigneurs Friedrich Cerha, Erich Urbanner and Iván Eröd.

In the field of Early Music the series Diletto Musicale, founded in 1958 and by now comprising more than 1500 works, has attained international fame; its wide spectrum reaches from Early Baroque music through a major emphasis on Franz Joseph Haydn to the works composed by the Strauss dynasty. The indispensable basis for all this was created by Doblinger with its new school music textbooks and, most importantly, its publications for instrument tuition – another important branch which is being consistently expanded and adapted to the most modern findings of pedagogy. Choral and Sacred Music complement the program as well as successful crossover works which convincingly bridge the gap between “art” and “entertainment”. Since the turn of the new millennium Doblinger has also entered partnerships with several of the most promising composers of the young and youngest generations – their stylistic gamut speaks for itself.

So it comes that the catalogue of today more than 20,000 titles contains an enormous spectrum of the music surrounding us: from the past to today.